Unfortunately, several setbacks in the recovery from the COVID-19 pandemic make necessary the difficult decision to cancel Hamvention 2021. Hundreds of volunteers have been working to do everything necessary to bring this Hamvention to the many amateur radio enthusiasts and vendors who support the Dayton Hamvention.

Vaccine distribution both in the United States and around the world is lagging behind what was planned. In addition, the emergence of a more communicable form of the COVID-19 virus increases the potential for further public health problems in the next few months. We make this difficult decision for the safety of our guests and vendors.

Stay tuned for information about a QSO party for the 2021 Hamvention weekend. We are looking forward to the 2022 Hamvention!!!

My thanks go out to all the activators and chasers who took part in the 1st European SOTA Activity Day on Saturday, 19 September 2020. Overall, 288 activators made 3622 QSOs. 706 chasers made 6722 contacts with various activating stations either by design or by chance. Taken overall, all the activators were on the air for a total of 754 hours.

The following analysis includes only those activators and chasers who, according to the procedures listed on the reflector, uploaded their logs at the latest 14 days after the event.

The three highest ranking ops in the category for the most S2S QSOs are:

Stephan DL/HB9EAJ/P with 69 S2S QSOs
Jarek SP9MA/P with 67 S2S QSOs
Mark HB9BDM/P with 64 S2S QSOs
The three highest ranking ops in the category for the most chaser QSOs are:

Manuel EA2DT with 136 QSOs
Lars SA4BLM with 91 QSOs
Ivo 9A1AA with 78 QSOs
The three ops who braved the elements on a summit for the longest amount of time are:

Tom M1EYP/P for 19 hrs. 16 min
Kurt OE1KBC/P for 14 hrs. 35 min
Jarek SP9MA/P for 9 hrs. and 48 min
Although the weather on September 19 was not dry throughout all of Europe, there was certainly a higher level of SOTA activity than on an ordinary Saturday. The large number of participants and the many positive comments on the SOTA reflector would clearly seem to indicate that we should repeat this event every year. As the date for the 2nd European SOTA Activity Day , I thus propose 18 September 2021 . The long-term goal would be to eventually introduce a Worldwide SOTA Activity Day.

Results in the “S2S” category

In the S2S category, Stephan DL/HB9EAJ/P scored the top position with 69 QSOs. He was on the air for 8 hours and 14 minutes from Herzogenhorn (DM/BW-002). He completed his first QSO at 0743 GMT and his last one at 1557 GMT. I was surprised to learn that he achieved this result using only SSB and FM (and no CW). Manual EA2DT logged 136 chasers, which means that Stephan worked 50.7% of the S2S QSOs. He reports that he used 5W SSB from his FT-818, this time with an additional LiPo, which after about 6 hours was necessary when his internal Windcamp 33 Wh LiPo was used up. Conditions were “meh” and he didn’t even give 17m a try. On 2m FM he used his handheld with a Chinese RH-770 clone antenna with an SMA connector, and with this he reached from Germany far into the Swiss Alps.

As for second place, this was achieved by Jarek SP9MA/P with 67 QSOs. He operated from Skrzyczne (SP/BZ-008) in the three modes CW, SSB and FM.

Third place goes to Mark HB9BDM/P with 64 QSOs. He worked from his neighborhood summit Hochwacht/Homberg (HB/AG-012), which is at an altitude of just 788 m ASL.

Results in the “Chaser” category

Accounting for entries from around the world, Manuel EA2DT has the most chaser QSOs, and thus no surprise that he also won the 1st European SOTA Activity Day. In total, he chased 136 activators. He completed the first one at 0633 GMT with EA2IF/P and the last one at 16:44 with DL/PC9DB/P, which indicates he was on the air for 10 hours and 11 minutes.

Results in the “Duration” category

Tom wrote me that this is a great surprise for him! He was originally intending to do a full 24-hour activation in a bid for a Swiss knife. He was under the impression that other OMs stayed out even longer than him! He made his 1st QSO: 0001z and his last QSO: 1917z. He intended to stay out even longer, but the wx condx were bad with strong winds (causing mast breakages) and HF condx were not looking good for NA DX.

I would first of all like to thank Sylvia OE5YNN and Paul for doing translation work for the web and Martin OE5REO, who together with Silvia voiced their readiness to follow the suggestion of Juerg HB9BIN to take the date for the OE5 SOTA Activity Day on 19 September and expand that event to become the 1st European SOTA Activity Day.

I would also like to thank all the European association managers who informed their members about the event and encouraged them to participate.

A final thanks to Andy MM0FMF, who performed the QSO analysis.

Proclaimed in 2011 by the Member States of UNESCO, and adopted by the United Nations General Assembly in 2012 as an International Day, February 13 became World Radio Day (WRD).

Radio is a powerful medium for celebrating humanity in all its diversity and constitutes a platform for democratic discourse. At the global level, radio remains the most widely consumed medium. This unique ability to reach out the widest audience means radio can shape a society’s experience of diversity, stand as an arena for all voices to speak out, be represented and heard. Radio stations should serve diverse communities, offering a wide variety of programs, viewpoints and content, and reflect the diversity of audiences in their organizations and operations. 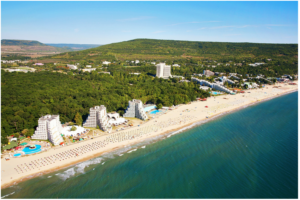